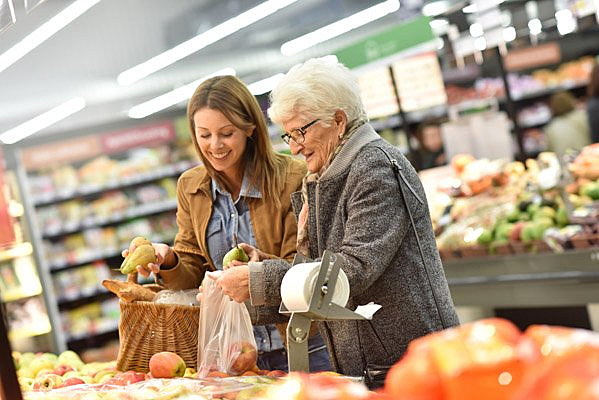 The newly opened Winco Foods grocery store in Missoula, Montana, is booming with business as customers visit for the “Winco Hype” and affordable shopping.

Winco Foods, a new store a part of a larger nationwide chain, has been packed with customers since opening on Feb. 22, 2021. Some customers have been driving as far as 30 miles to check out the new store, and shop the warehouse-like building’s low prices.

“We’re here to see what the hype is all about,” said Brooke Cousins, who had driven from her home in Lolo, MT. “So far, it’s cheaper than the Super 1 in the Bitterroot.” This was Cousins’ first time at Winco, and she wasn’t alone in being a first time shopper.

John and MaryAnne Thiebaund were also visiting for the first time. “We’re here to see what the store has to offer,” said John Thiebaund. “It’s nice,” said MaryAnne Thiebaund, “the variety here is much better than other stores, and in general their prices are lower.”

About two weeks after the store opened, the building’s parking lot was full of cars, and lines piled at the entrance, cashiers, counters and exit. This was noon on a Wednesdy.

“Oh yeah, this isn’t busy,” said Kailen Goins, a stocker at Winco. “Weekends are way busier, there are huge crowds of people, and you usually can’t walk anywhere without being in a mass of people.

According to Shawn Early, the new store’s manager, Missoula’s Winco has had successful sales since day one. “It’s been running really well, and we’ve got great response from the community pretty much since we opened up,” Early said.

Early has worked for Winco for 31 years, and has waited for the new store in Missoula to open so he could move from Tacoma, WA. “I love to recreate outside,” he said, “so I could eventually see myself retiring here.”